In the poem “The Rime of An Ancient Mariner”, there is a sailor who has an urge of narrating his tale. He gets hold of a man going to a wedding and start narrating his story. He is not a storyteller. He just wants to pass on his pain to someone else. As the poem reach its culmination, the sailor succeeds in doing so.

Over the years, I have come to realize that we all are that sailor in disguise, desperate to tell our tales. All we are waiting for is a patient listener.

Humans of New York, for years now, have been publishing stories of passersby on the streets of New York. These tales no matter how mundane talks of pain, love, struggle and strength. Some of these tales were a good read but there were some that left an everlasting impression on us.

HONY stories’ remind us that we all are soldiers in the battlefield of life surviving different kinds of war. So, here are some of our favorite stories from HONY:

The Story of Cobbler Verses

“I call them clobber verses. There are six of them. They’re the verses that get used to hammer gay people. The funny thing is that I never felt pressured by God himself. Only his followers. But I desperately wanted God to change me. I didn’t want to be part of a group with so much shame attached to it. So I started praying in my twenties for God to make me straight. If I could have taken a pill, I would have. I joined the ministry. I got married. I told my wife that I’d had experiences with men, but I convinced both of us that I could choose to be different. I wanted to be normal. I wanted kids. I thought it was just a matter of commitment. I even tried to take reparative therapy classes—just to show her I was serious. They tried to teach me that homosexuality wasn’t real. They said that I’d just had an overbearing mother. But I couldn’t change. I kept slipping up. I couldn’t give my wife what she needed. My marriage ended. I had tried so hard but nothing worked. I got so angry with God for not keeping up his end of the bargain. But after some time, I finally realized why he wouldn’t change me. He never felt like he needed to.” 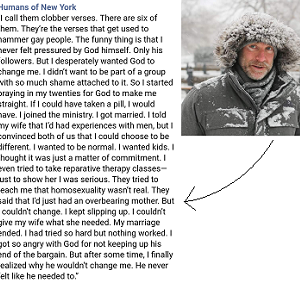 Parenting Is SIMPLE , Said No Parent Ever

“I always thought of kids as being simple in a way. I knew that having a child would be challenging, but I underestimated how complicated their emotions can be. I thought I’d have greater influence over my child’s mood. I imagined that I’d be able to make him happy when he’s unhappy. I hoped that I would always have a solution. But you learn quickly that some unhappiness doesn’t have a quick fix. And often it’s just part of who he is. And that can be painful to accept. Sometimes I just have to provide as much guidance as possible, and trust that he’ll find comfort within himself.”

Authenticity Is Prerequisite To Success

“I want to be a stand up comic. The hardest thing is to find material that’s not just funny—but also true. Funny can just be a surprise. But good comedy articulates truth in a certain way. And I don’t think I’ve experienced enough to know what’s true for other people. I’ve had a bit of a charmed life. Nothing too traumatic has happened to me. I have a lot of creative energy but I’m not sure that I have the arsenal to back it up. Recently I was at an open mic upstate, and there was an older guy performing who used to be a heroin addict. There was just this sense that you should be paying attention to every word he says, and not just the punch line. I’m not there yet.”

Mind you! A story need not have a sad ending. Some stories leave us laughing, some make is feel positive and some inspires us just like the one given below.

Size Does Not Matter

“Last year I started figure modelling for art classes. I’m plus-sized, so I was a little worried about being nude. I was nervous about everyone seeing my stomach, and my thighs, and all my fat. But apparently my curves are fun to draw. In the classroom, all the features I saw as negative were viewed as assets. One student told me that it’s no fun to draw straight lines. It’s been liberating for me, I’ve always been insecure about my belly. But now my belly has been of so many beautiful pieces of art.” 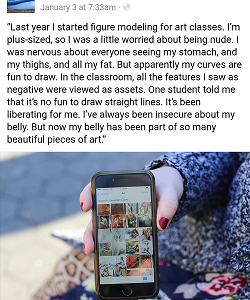 Humans of New York is a great initiative by Brandon Stanton. Now, the narratives are not limited to one city. Currently, Stanton and his team are touring Brazil. We have already got a glimpse of stories of war, stories of refugees and stories of common people trying to survive in uncommon situations. Let’s see what Brasil has in store for the photographer and the readers.

Do you like Humans of New York? Which story is your favorite? Tell us @Fuzzable.