Social enterprise company notjust have teamed up with Save the Children and created a selection of Christmas jumpers that celebrate British life – and raise funds for charity.

The company famously released Gareth Southgate and Jeremy Corbyn festive jumpers in 2018, and helped to raise £30,000 for charity – and this year, they have gone all out with their designs!

The Save the Children collection is home to a multitude of designs. One jumper features the face of Phoebe Waller-Bridge, who has earned critical acclaim through her award-winning BBC series, Fleabag, while another takes inspiration from fellow BBC series Peaky Blinders and bears the classic waistcoat design which is worn by the show’s characters. Meanwhile, documentary maker Louis Theroux bears his face on a bright purple knitted design. There’s also many more designs to choose from, including a design inspired by the popular reality series Love Island! 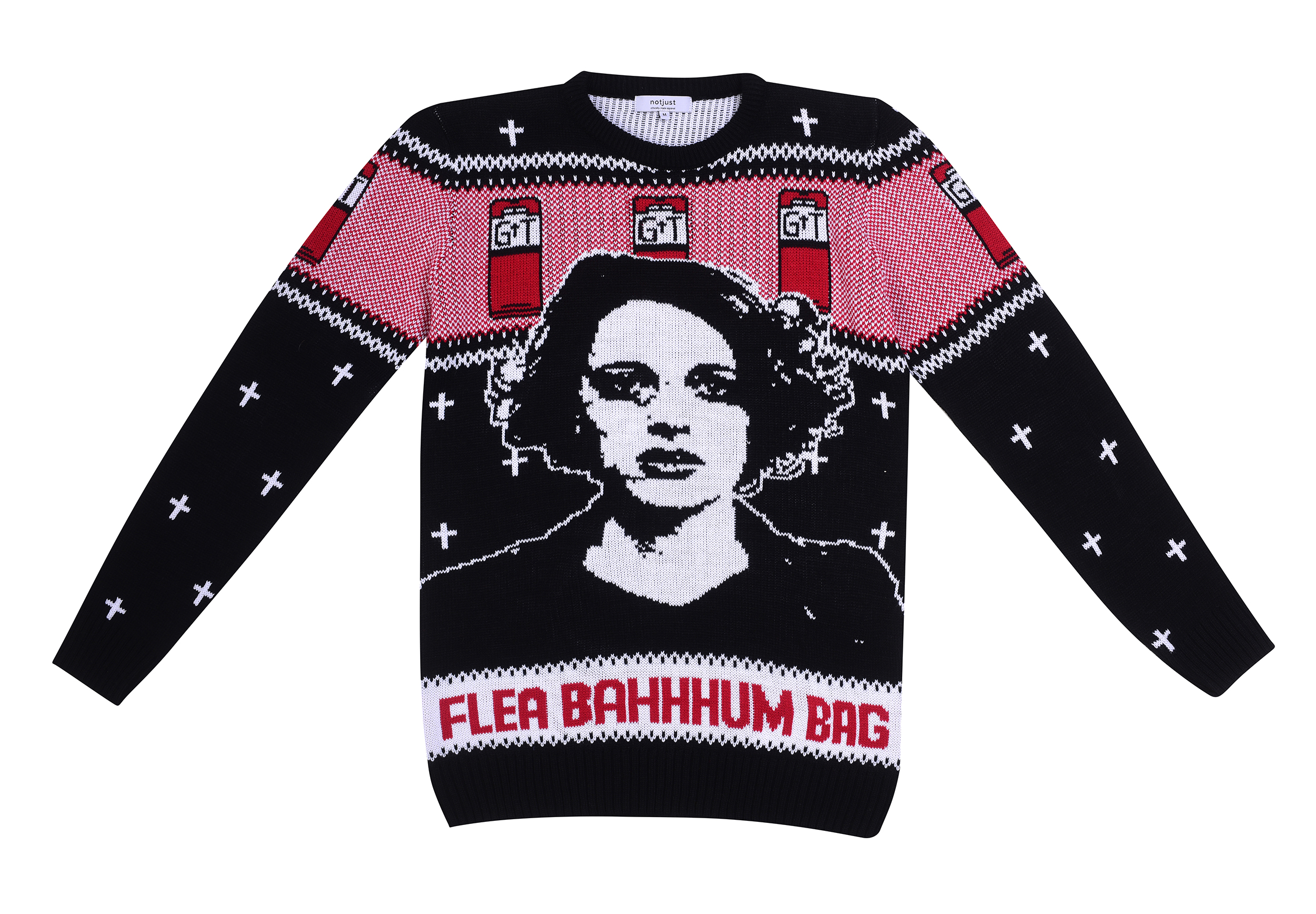 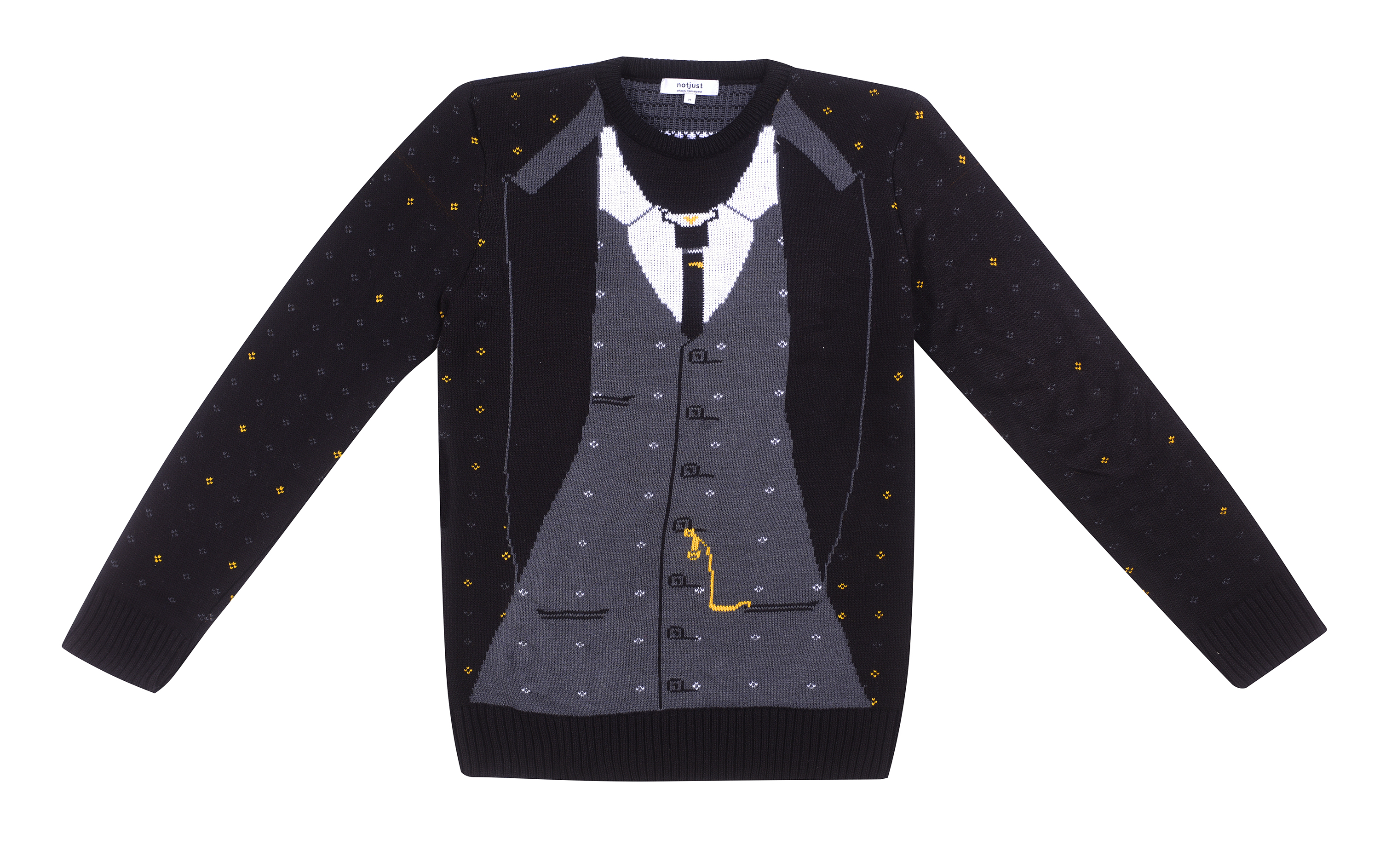 notjust have also released their own festive range, with proceeds going toward different charities. Following popular demand, a Greggs jumper has been created with patterned vegan sausage rolls. The vegan sausage roll was launched earlier this year, and has proven to be very successful among both vegans and vegetarians. 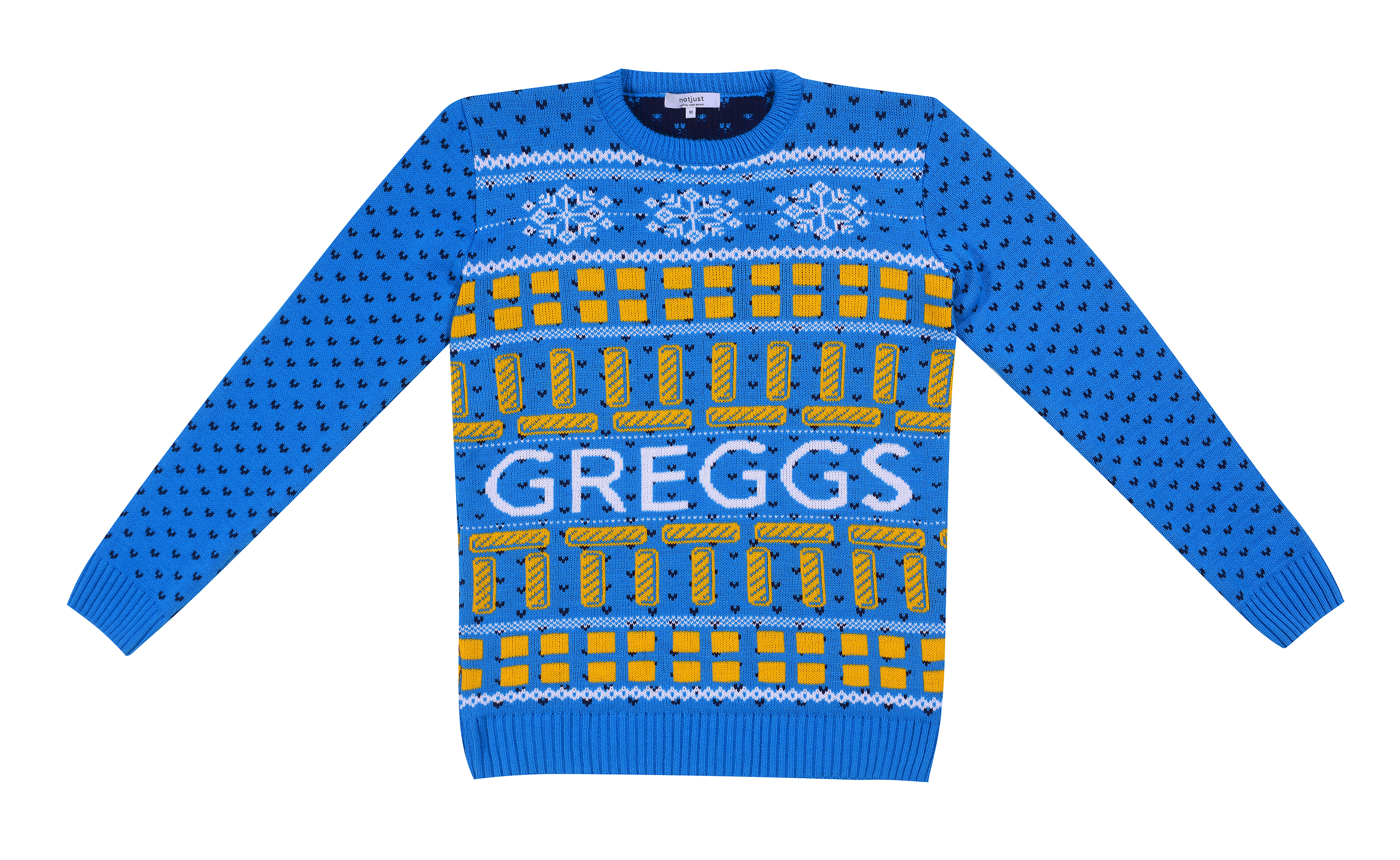 Music is represented in the form of Lewis Capaldi, who gives a toast to his biggest fan, Joyeux Noel Gallagher on the back of his design. Grime rapper Slowthai also appears on a striking orange design. 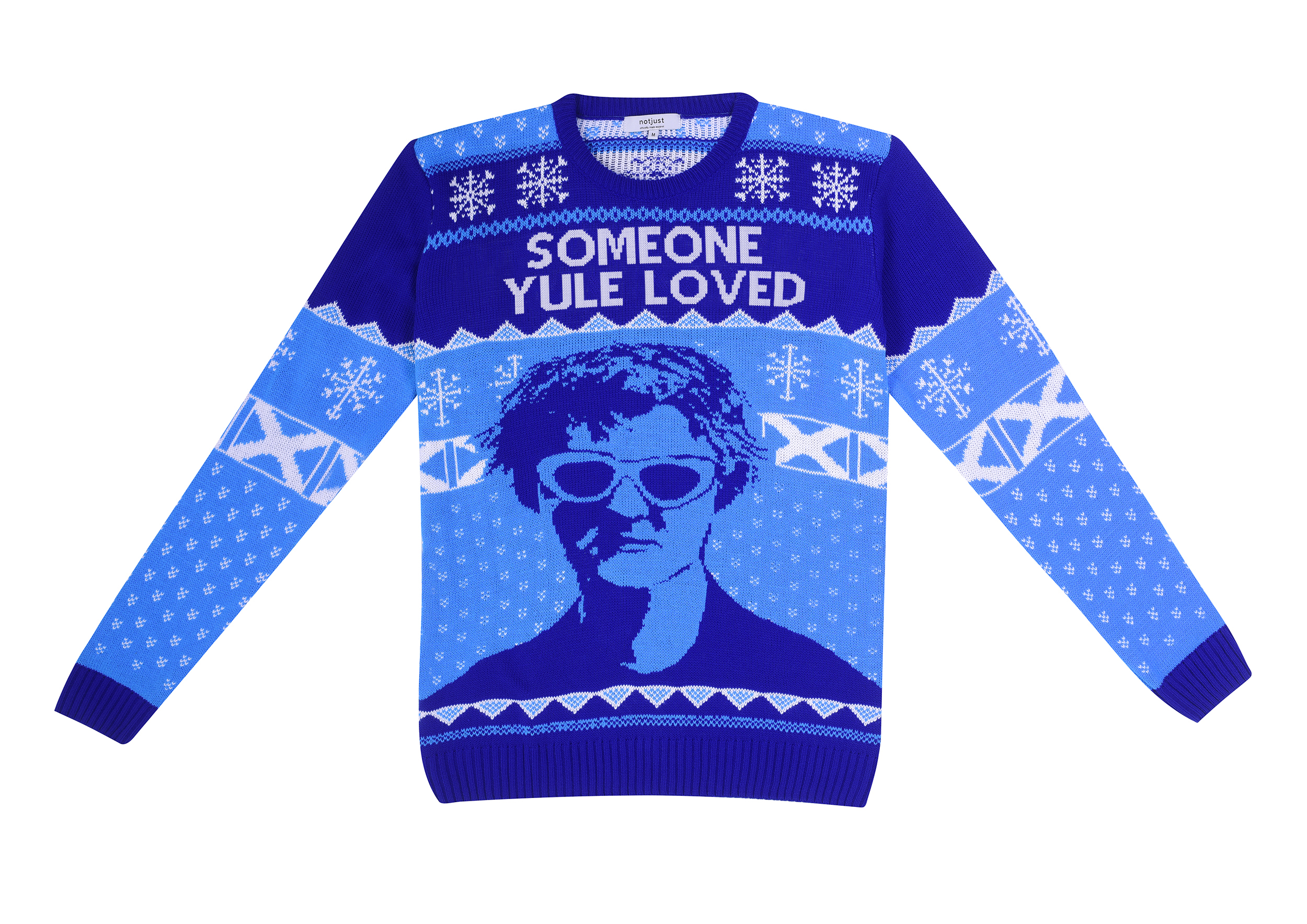 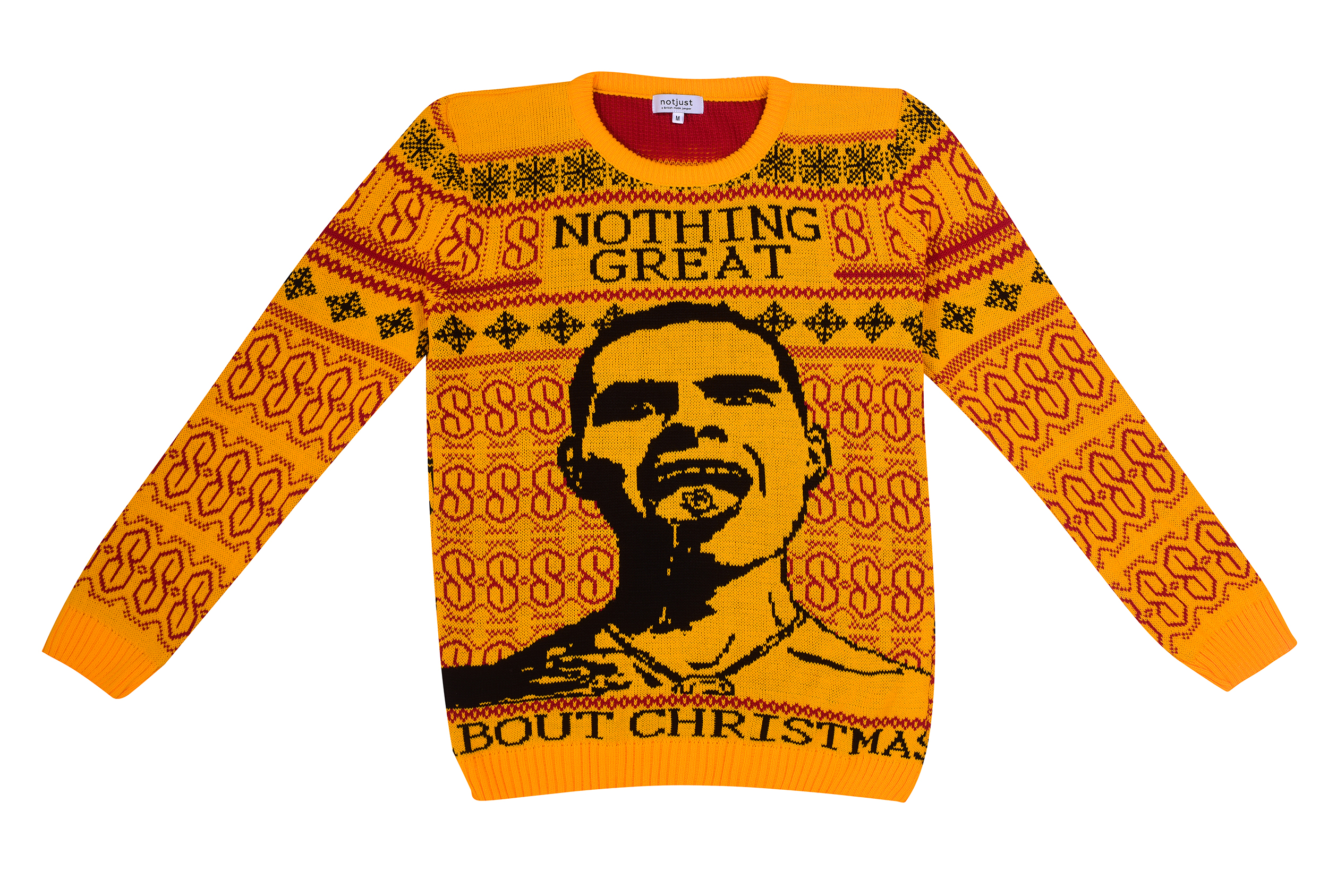 And as we gear up for the forthcoming General Election in December, customers can join the Christmas Jumper Referendum, where you can cast your vote by purchasing a ‘Leave’ or ‘Remain’ Brexit jumper, with results posted the day before the election takes place (11 December). 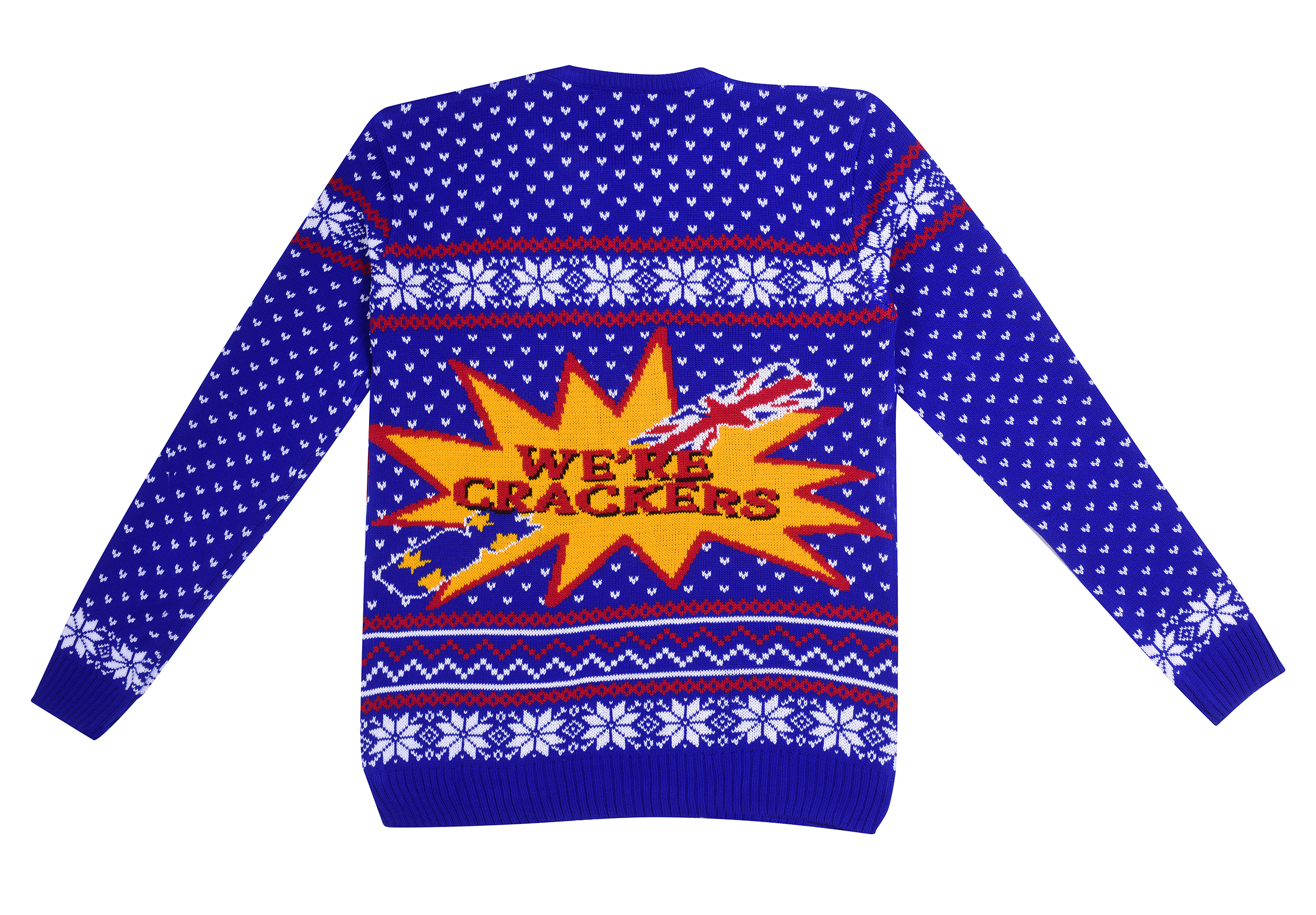 Love Island has also become one of the biggest and hottest reality shows to grace UK television over the past few years. Two of this year’s contestants, Maura Higgens and Tommy Fury have also joined forces to create their own Love Island themed jumper – which references fellow islander Ovie Soko’s famous text message call out when the islanders would receive a text message. 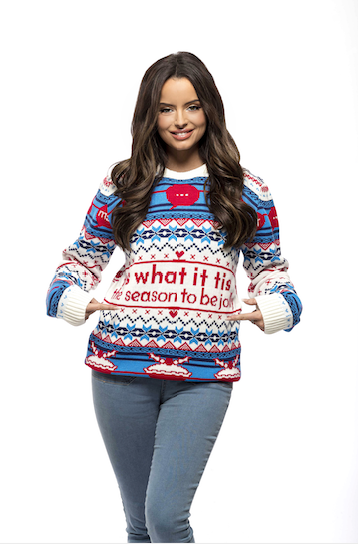 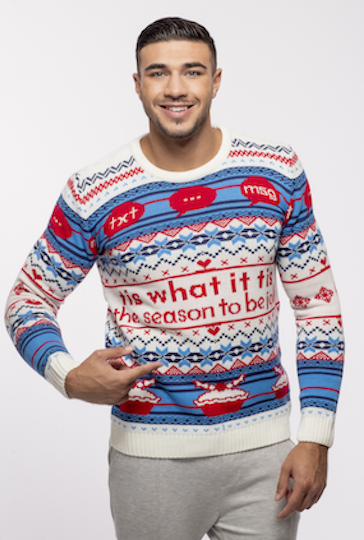 In terms of other reality shows, there’s also a t-shirt for Strictly Come Dancing. This jumper is a bright purple design bearing the show’s iconic glitterball, which is awarded to the winning couple, as well as judge’s scores and the slogan ‘Strictly Come Christmas’. 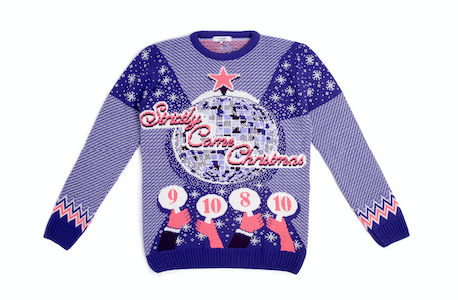 “We’re back again for our third year, paying homage to the people and events that have shaped our nation this year,” Mike Harding, founder of notjust, had to say. “Even in times of division we’re constantly seeing spectacular British talent come through that the nation collectively rejoices over and for that we’re paying thanks to the brave, bold and beautiful through of festive range of knits – and hope to inspire some laughs along the way.

“Through out flagship collection with Save the Children for Christmas Jumper Day, as well as our partnerships with a number of other small not-for-profits, our customers are able to ensure each purchase comes complete with positive impact around some of the biggest challenges society faces today.”

The jumpers are vegan friendly, and have been produced domestically within the UK in fair and ethical working conditions, while also keeping carbon emissions to a minimuim.  They are unisex, and range between £32.99-£39.99 and come in a variety of sizes, from extra small (XS) to extra extra large (XXL).

Donations from the sales of the jumpers from the Save the Children range will be sold to raise £50,000 for Save the Children’s Christmas Jumper Day. 10% from other jumper sales will be donated to a charity of the customers’ choice.

The jumpers are available to buy here, so make sure to purchase one if you want to feel festive this season, and raise money for charity! Christmas Jumper Day is taking place on 13 December, with Save the Children expecting over 5 million people across the UK to participate. You can also donate £2 to Save the Children here, and help give the forgotten children of the world a brighter future.

Sarah Button-Stephens, the Senior Campaign Manager for Save the Children’s Christmas Jumper Day, said: “We are delighted to be working with notjust on a fantastic range of Christmas jumpers that celebrates some of Britain’s most loved personalities.

“All money raised could help give a child living in a refugee camp clothes to keep them warm through winter, help buy nutritious food for their entire family, or set up a safe space to give children the chance to be children again.”

Let us know your favourite jumper from the collection over on Twitter @Fuzzable!