Caro and Jeff Horne seem to have it all until they learn that Jeff is infertile. Caro married Jeff because her biggest wish was to be a mother, and he had the means to give their children a better life than she’d had. Jeff, who is besotted with Caro, is terrified he will lose her now they can’t have a baby.

Across town, Sharon is eight months pregnant and unsure if she really wants to be a mother. Soon her world will collide with Jeff’s. He wants to keep Caro happy and decides that getting a baby is the only way.

Then Caro is accidently drawn into an underworld of drugs…
Meanwhile, Jeff is increasingly desperate to find a baby – but what lengths is he prepared to go to?

Is Sharon in danger, and will Caro ever have the family she’s always dreamed of? 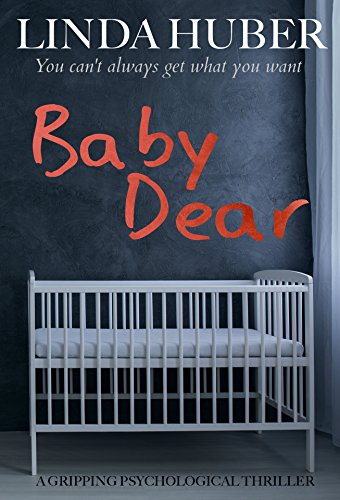 I was immediately drawn in to reading this book when I found out the story-line was based on infertility, it really does make you wonder how far people will go to get their very own child. ‘Baby Dear’ showed just that, people will go extreme lengths and put a lot of people in danger to get what they want.

‘Baby Dear’ starts off with an incredibly gripping scene, where you’re already feeling like a big bag of nerves as to where on earth this story is headed. Then we are taken back to the beginning where it all starts and we’re introduced to Caro and Jeff.

Caro and Jeff are informed that they are unable to conceive, due to Jeff’s low sperm count. I’m not a mother, however, it is one of my biggest fears to one day be told that I am unable to have children. It would probably drive me crazy too. But the question will always be, how crazy do you have to be to go as far as Jeff is about to go? Jeff feels like a complete failure, knowing he can’t give his wife the one thing she wants more than anything in the world, paranoia kicks in and he begins to panic that his wife will leave him for somebody who can give her what she wants. Caro begins to doubt her marriage and her love for her husband, leaving her in a predicament of finding the right way to say goodbye. You can’t help but feel sorry for the couple, I don’t know how anybody could ever accept that sort of news and not feel their relationship tearing a part. It’s definitely a make it or break it moment.

We then meet a heavily pregnant woman, Sharon, who is on the other side of the spectrum, struggling to come to terms with the fact she’s going to be a mother. Whilst her pregnancy should be filled with excitement, in reality it’s filled with complete dread and her marriage with Craig is slipping away everyday they both don’t want this lifestyle. It’s hard to like Sharon to start off with, I felt anger bubble up over the fact that there’s a lovely couple out there not able to have a child, and Sharon is moping about and complaining over carrying a child that anybody would be lucky to have. Sharon meets a lovely lady, Julie, who has children of her own and with her help and guidance, Sharon believes motherhood might be in her after all. Obviously once the baby is in the world, Sharon’s mind is changed immediately when the little bundle of joy is placed in to her arms… Craig on the other hand, is still not feeling fatherhood.

What I loved the most about ‘Baby Dear’, is the fact Linda made Jeff the prime character, meaning we got to see his vulnerability, his insecurities, and shame. It was refreshing to see, as we’re always reading about the woman being vulnerable and her going crazy lengths, it was nice to see a man is capable of the exact same thing. At first Jeff was just a scared man who wanted the best for his wife, he invested a lot of his time in finding ways to get Caro her perfect baby, there was so much innocence about it. However, when he starts to conduct thoughts of kidnapping, you realise this isn’t innocent at all and Jeff’s sanity is ready to be questioned.

Whilst this book was rather slow paced in some chapters, the build up and the ending was definitely most worth it. I loved it from start to finish and I can’t wait to read more of Linda’s books! I felt like I was in the book alongside these characters, I wanted to shake Jeff and tell him to wake up, I wanted to help and understand the way he was feeling and most importantly I wanted to warn Caro about everything that was about to happen. It was such a heartbreaking story-line and Linda wrote it so well, I read it in the space of just one day.

Have you read ‘Baby Dear’ by Linda Huber? Let us know your thoughts in the comments below or tweet us over at @Fuzzable!